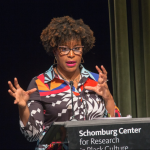 Jessica Marie Johnson is an assistant professor of history at Michigan State University. Johnson holds a Ph.D. in history from the University of Maryland, College Park, and a B.A. in African & African American Studies from Washington University in St. Louis where she was also a Mellon-Mays Fellow.

Johnson's research interests include women, gender, and sexuality in the African diaspora; histories of slavery and the slave trade; digital feminism, digital history, and use of new media; and theories of race and diaspora. As a digital humanist, Johnson is interested in ways digital and social media are used to disseminate and create historical narratives, in particular, comparative histories of slavery and people of African descent. Johnson has been the recipient of a number of awards including fellowships at the Pennsylvania State University, Bowdoin College, and the Gilder-Lehrman Institute of American History. Alongside African Diaspora, Ph.D. she's working on two projects--a history of free women of African descent who resided in the port towns of Senegal, Saint-Domingue, and Gulf Coast Louisiana during the eighteenth century and a compilation of work on 'black code studies' in collaboration with Mark Anthony Neal.